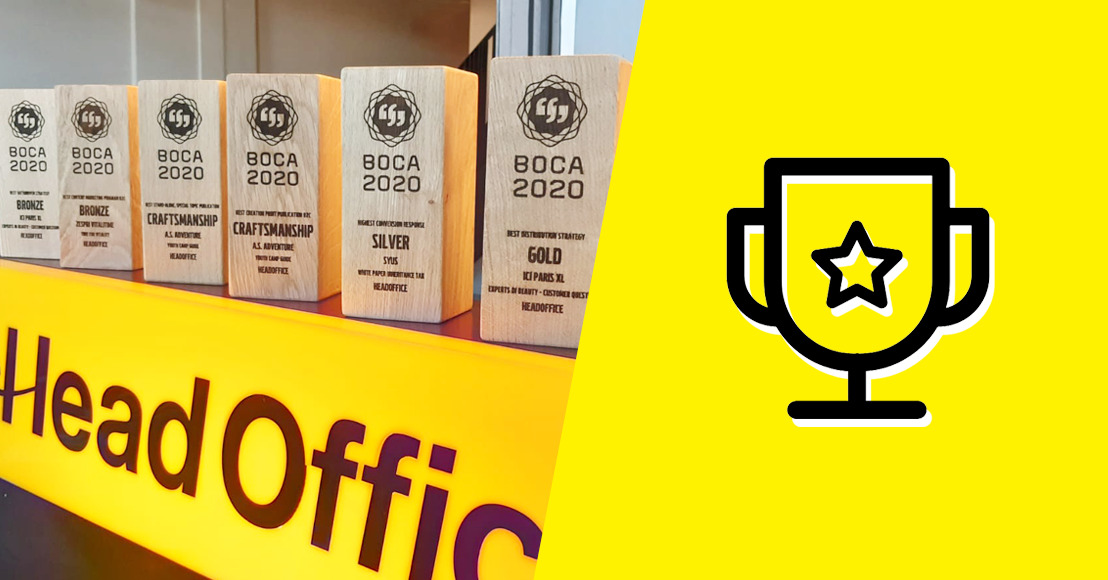 The categories of the BOCAs, organised by ACC/CUSTO, are the Content Strategy Awards for the most successful programmes; the Content Distribution & Promotion Awards awarded to cases that use different channels in the most original way. The third and final category is the Content Craftmanship Awards, in which the most creative and innovative cases are recognised within specific categories.

And now the big reveal … With which campaigns did HeadOffice win this year?

Well, let’s just say 6 awards were added to our trophy cabinet. The jury awarded the work we did for our customers – ICI PARIS XL, A.S.Adventure, Zespri and Syus Investments – with one (or more) awards.

Zespri wins
Zespri was fully committed to vitality. Because: how vital are Belgians actually? This was the starting point for a colourful and energetic campaign, Time for Vitality, which could not and did not go unnoticed. The bronze award – for 'Best content marketing program B2C – at the BOCAs is the ‘kiwi’ on the cake for both us and the customer!

Silver for Syus!
Syus Investments received a silver award for the white paper 'Inheritance Tax' in the category 'Highest conversion response'. The right message, to the right audience, at the right time, resulted in a record number of leads for Syus Investments, which advises individuals and investors and helps them manage their investment properties.

HeadOffice is positioning itself for a strong multi-channel approach

The 6 brand-new wooden awards are sitting pretty on the shelf at HeadOffice. And we are happy about that. Awards for online, social media and for print: HeadOffice is showing itself – more than ever – to be a major player in multi-channel approach and content.